This is posted by Lim Li☺ 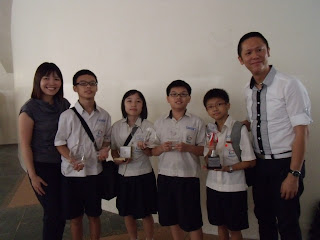 Today we took the Asia Pacific Mathematical Olympiad for Primary Schools (APMOPS which is the 2nd Round of SMOPS) in the morning and also attended the prize giving ceremony held in the afternoon.

Zheng Han and I were in group 2, and there were only 2 girls (out of 30 people in my group). The other girl won a SPSO Top 30, and is also in NUS High's Einstein Club, just like me. I also met another boy called Eugene, who told me that he visited this blog before.

The school, Hwa Chong Institution, provided us packet lunch after the competition, which they did not give the teachers (too bad). There were rice, brocoli, tofu, fish and meat. Zheng Han spilled the food on the table and then he ate it (so unhygienic and disgusting). Some time later, they gave each of us a McDonald french fries and apple pie. Zheng Han dropped a french fry on the grass and he ate it (more disgusting). After the prize giving ceremony, there was a buffet (bee hoon, bao, cream puff, very spicy carrot cake, cheese tarts, hot dog pastry, chicken wing, fruit punch etc.) for all students and guests. I forgot to bring lunch boxes to "da-bao".

The top in SMOPS is Clarence Chew from Tao Nan. The top few in APMOPS are from Shanghai.
Posted by Lim Jeck at 17:42 7 comments:

Hello. ☺☻. This afternoon, I played truant with Step, Wei Jue, Wei Wei and Ji Xuan. This time, we played truant for 15 min more than last time (30 mins). During that time, we had our lunch in our school canteen. We then took the school bus to Clementi Town Secondary School for the Maths Talent Quest competition.

We played some games while waiting for our turns to take the competition, which was on the computer. First, we played the Rubik's Cube and I totally failed. After that, we played Sudoku. Then, we went to play some games on the stage (without audience) - each person from each school can play one kind of game. I played sliding blocks. I had 5 mins to complete the puzzle but there was something wrong with the computer, I had only 1 min instead of 5 mins so I did not manage to complete it. Then I played another game that I could remember the name. At the end of the games, I only accumulated 4 points and could exchange the points for an 8-point star puzzle (see below). 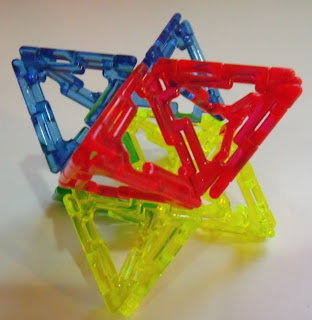 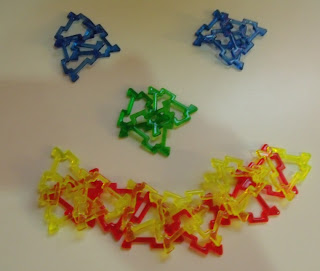 Then, it was our turn to take the competition. It was challenging and I got 12 marks out of a total of 25 marks (1/2 more mark to pass!). During the competition, there was someone from another school hollering very loudly at the invigilator. Step got 11 marks, Wei Jue got 10 marks, Wei Wei got 9 and I do not know how many marks Ji Xuan got.

Following that, we went for our refreshments. There were some black thingy (carrot cake?), yellow stuff, cream puff, sandwiches, chicken wings ... The food was scrumptious and mouthwatering, especially the cream puff, which was luscious and cooling. The lemon drink was also very refreshing.

Next, we proceeded to the hall for the prize presentation ceremony. Step, Wei Jue and Wei Wei got Silver awards. I got Individual 5th (a trophy) and Gold award (another trophy). Step needed 1 more mark to get Gold. The Individual 2nd and 3rd got something like a tablet, but the Individual 1st won an iPad 2 (so lucky!!). My school also won 2nd for Team Award (a medal), same as last time (St Andrews Maths & Science Competition).
Posted by Lim Jeck at 18:40 No comments:

Today, more than 12 hours but less than 15 hours ago, I took part in a math competition called Singapore National Girls' Mathematics Competition (SNGMC). It is organized by RGS. When I reached my school at 7:30 am, I was the latest as usual. Then, we waited what seemed like eternity for Mr Ng to come, who gave the excuse that he bought a toy transformer at 12 midnight the day before and went home at 3 am. The 6 of us girls and Mr Ng took school bus to RGS.

When we reached RGS, they gave us a nice bag with Rubik's cube keychain, sliding puzzle keychain and 2 small metal puzzles inside. They also gave us a bottle of mineral water with RGS logo. I think there were 60 schools and about 400 girls taking part in SNGMC. We were divided into groups, mine was group E2. After that, we took the competition comprising about 25 questions. I left 4 blanks because I forgot to guess their answers. I found a mistake about 5 mins before time was up but I did not have time to change it. After that, we went for the Amazing Race Competition and someone commented that I must be Lim Jeck's sister (strangely, she did not remark that I am Lim Min's sister since I was in RGS compound). I hated the Amazing Race because I am very (very) unfit.

After the Amazing Race, we went for free food which was chicken rice with nuggets and chicken wings. It was delectable. The queue was very (very) long. After the refreshment we went to the hall for the results announcement. I got the 11th to 20th position (the individual prizes were: 1st, 2nd, 3rd, 4th to 10th and 11th to 20th) and won $50 (the prize money will be sent to my school).
Posted by Lim Jeck at 22:05 No comments:

The results are out - 3 from RI (Ding Yue, Ryan Kor and Joseph Kuan), 1 from ACSI (Ang Jie Jun) and 2 from NUS High (Ang Yan Sheng and I) will be representing Singapore in the 52nd International Mathematical Olympiad (IMO), which will be held from 18 to 25 July in Amsterdam, The Netherlands.


Training will start next Saturday. I think just like previous years, we will be training every day during the June holidays and I am going to miss 4.5 weeks of classes when school reopens.

Hope we can better last year's results of 4 Silvers, 1 Bronze and 1 Honourable Mention!
Posted by Lim Jeck at 22:11 2 comments:

We took the NTST yesterday and today. It was ok. I managed to do 5.9 questions.
Posted by Lim Jeck at 14:21 No comments: