Today I took the NUS High Selection Test. The 1 1/2 hr Math paper was okay (easier than NMOS) but the 1 1/4 hr Science paper was slightly hard. The Math paper had 7 pages (1st page was the cover page, last page was a blank page) and 23 non-MCQ questions where you have to shade the integer answer, and the Science paper had 30 MCQ questions and 24 pages (1st page was cover page, last page was a periodic table which I do not know how to use - I think there was 1 question about it which I guessed the answer).

One of the Science questions which I can remember is, there are two containers filled with hot water: one is a metal container with wooden casing, the other is a complete metal container. Both containers have a thermometer inside. Choose the correct line graph for the temperature, from the 4 or 5 choices given.
Posted by Lim Jeck at 13:33 23 comments:

This is posted by Lim Min's mum.

Singapore will be sending 8 girls to the 2011 China Girls Mathematical Olympiad (CGMO), to be held in ShenZhen (China) from 30 July to 3 August. The CGMO was originally established as a regional competition for female high school students from China. Several years ago China expanded the competition to countries from around the world, with the USA, Russia, United Kingdom and Singapore among the invitees.

After 2 days of selection tests (comprising 4-hr papers of 4 questions each) last Saturday and Sunday, the following girls are selected:

All the best to Team Singapore, and hope the girls can better last year's results of 1 Silver and 4 Bronzes.
Posted by Lim Jeck at 09:11 1 comment:

This is posted by Lim Li ☺☻

After I had practised the SMO Junior questions and after my teacher asked us to complete the P5 thinkingMath@onSponge Conquer Problem Sums, I realised that something was wrong ... 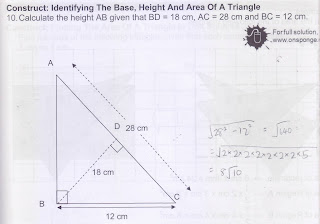 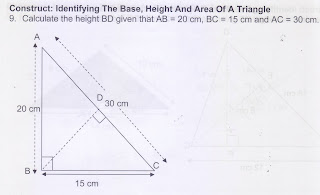 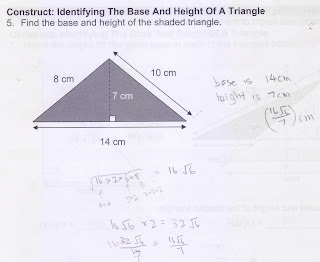 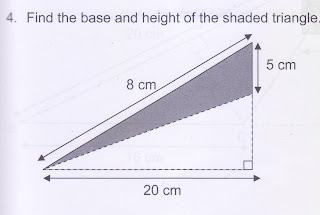 How can the hypotenuse be 8, which is shorter than the base length of 20???

There are more mistakes in the book, which I am too lazy to scan and highlight in this post.
Posted by Lim Jeck at 10:26 11 comments: 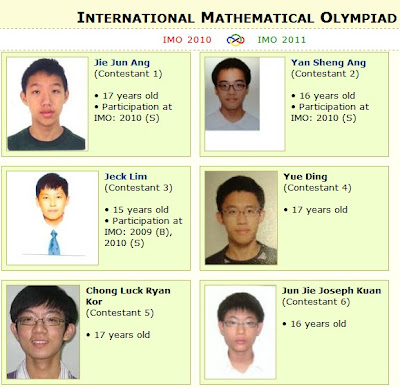 This year's Singapore IMO team comprises 1 JC2, 4 JC1s and 1 Sec 4. There is a high chance that IMO participants will get selected again the following year, as long as they qualify to take part again. Besides the obvious fact that they are among the top in the National Team (consisting of typically 20-25 students), they have also undergone intensive training in preparation for the IMO, and hence, are more well prepared for the selection tests. This means that, for 2012, it is likely that 5 places will be taken up by the current team members (unless, some of them also qualify for other International Science Olympiads and decide to partake in another competition).

The younger National Team members (current Year 3s and 4s) who aspire to be part of the IMO Team will probably have to work extremely hard, to secure a place in IMO Team 2012! I think Lim Jeck is very fortunate that he was first selected into the IMO Team in Sec 2. The competition to earn a coveted place in the IMO Team was probably less stiff then. As more Maths Olympiad competitions are organised for the primary level, kids get exposed to Maths Olympiad at an early age, and with more primary school kids taking part in the SMO (for secondary and JC levels), the quality of the Junior/Senior/National Team members will just get better. This cannot be a bad thing, it means the quality of our IMO Team will only improve, and we are likely to clinch more Golds in the future (special note: Singapore has won ONLY a single Gold medal in 1996, after taking part in IMO for 23 times so far). 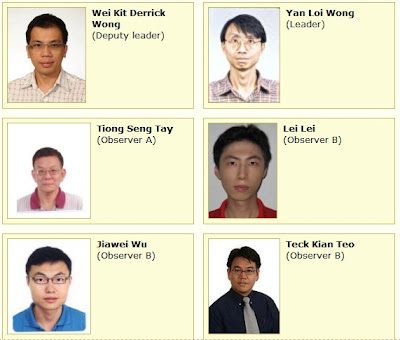 The above are the leaders and observers accompanying the team to the 52nd IMO held in Amsterdam, the Netherlands, from 12 to 25 July. The Leader and Observer A will be there earlier, as they are involved in the jury meeting to select 6 questions from the shortlisted IMO questions. After which, they are barred from any contact with the participants and Observer Bs since they will have prior knowledge to the selected IMO questions. Before the competition begins, the Deputy Leader and Observer Bs are allowed to spend some time with the participants, it could be to give more training, encouragement or pep talk (I think the last part is crucial, as you normally watch on TV, the sports coaches give pep talk to players, during important competitions).

To ensure fairness in marking, the Leader and Deputy Leader (and sometimes one Observer B) are permitted to participate in the marks coordination session, with two Coordinators assigned by IMO Foundation. This will ensure that the participants' solutions have been fairly assessed (meaning, you don't have to worry that your solutions are not clearly understood by uninitiated markers, or that marks are unfairly deducted).

Some countries even send Observer Cs, who are allowed to stay at the same site as the participants.

To know what typically happens throughout the IMO, you can read an interesting account of the 51st IMO by a UK student here, and by a UK leader, here. These diaries mentioned the disqualification of the North Korea team.
Posted by Lim Jeck at 12:00 No comments:

After that, another 2 weeks' training from 27 June to 12 July, before flying to Amsterdam (Netherlands), where the IMO is held from 15 to 25 July.
Posted by Lim Jeck at 06:48 No comments:

Just want to comment on the letters from NUS High. We have received a number of letters (this year and last 2 years) from NUS High, informing us of Lim Jeck going for National Team Selection Test or IMO National Team Training (see letter below) or some other overseas competitions. I always find the letters rather impersonal - there is no name mentioned. It is as if the letter is a generic one to be sent to the entire cohort, when in actual fact it was sent to only a few selected students. Why don't they add more personal touch, by naming 'Lim Jeck' in the letter instead of 'your child', addressing the letter to 'Dear Parent/Guardian of Lim Jeck' instead of 'Dear Parent/Guardian'? Sometimes I look at the letters and I wonder if they are indeed addressed to me, or to some other parents? 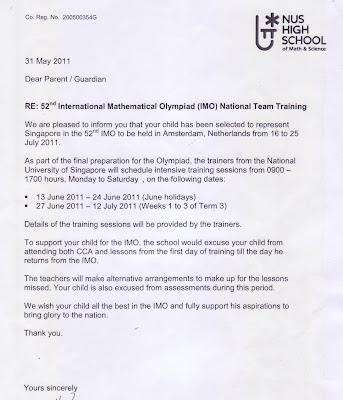 In contrast, the letter below from MOE seems more personalised. 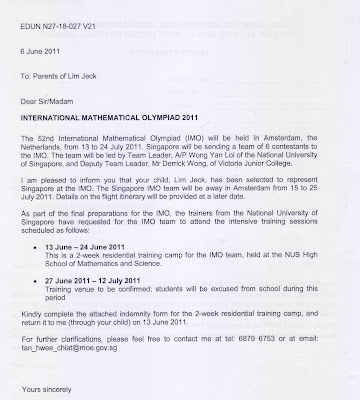 Yay! I got another A+ for my NUS modules.

Lim Jeck's various subject/mentor teachers have given their comments on him, in the progress report of Semester 1, 2011. It is apparent from the comments that Lim Jeck has shown aptitude for Maths, Physics, Chemistry and Computing. However, he tends to be less proactive in the other subjects that he has less passion in. He is also too reserved and quiet.

Besides putting more efforts in his weaker subjects, I think he should also learn to be more articulate, as one may have the best technical knowledge but it would be in vain if one is not able to express one's thoughts, ideas and views clearly to others.


BL4104 Diversity of Invertebrates & Vertebrates: Lim Jeck is a reserved and courteous student. He has to be more proactive in his learning and strive to do even better. With more determination, he should be able to attain better results.

BL4107 Advanced Cell Biology I: Lim Jeck is a bright and pleasant student with a quiet disposition. To maximize his potential, he is encouraged to take a more proactive approach towards learning, and seek clarifications when a need arises. Keep up the good work!

CL4101 Chinese 4A: Lim Jeck is a quiet and smart boy. He has a very good foundation in Chinese. However he needs to be more active in participating in class activities.

CM4105 Chemical Energetics & Kinetics: Lim Jeck is a diligent and meticulous student who shows an excellent understanding of the content of this module. He has the determination to do well in his work.

CS4202 Object Oriented Programming II: Jeck has immense potential to do well in Computing. He is fast in grasping new and complex concepts and has demonstrated an aptitude to come up with excellent algorithms in solving difficult questions. He is also humble and willing to share his learning with his classmates. He should continue to read extensively. Keep up the good attitude!

EL4104 Language in Society I: Jeck is a motivated boy who tries his best to excel. He takes pride in his work and does his best to make some progress in his English results. jeck is capable of better grades if he continues to work harder.

FA4101 Art Advanced I: Jeck has shown improvement after a series of consultations. His positive attitude has helped him to endure beyond his earlier struggles in concept development and rendering techniques. He should explore media other than pencils to meet the demands of the Year 4 art modules.

MA6207 AP Statistics: Lim Jeck is an exceptionally bright boy with highly commendable talent in Mathematics. He is an independent learner and is able to grasp concepts easily.

MA6404 Introduction to Game Theory: Jeck is intelligent and shows in depth understanding of concepts.

PC4101 Advanced Physics I: Lim Jeck is a natural talent in Physics. He continues to do well and achieves excellent result in the subject. He always tops the class during test and exam as he has a strong foundation. Do keep up with the positive attitude and enthusiasm.

PC4206 Physics Olympiad Training II: Lim Jeck is a capable student with clear skill in the subject of physics, and has submitted work of consistent quality. This has allowed him to do well for the module. Good work!

Mentor Remarks: Conduct: Very Good. Lim Jeck is a diligent, conscientious and consistent student who shows eagerness and has the capacity to learn. He is capable of producing good work and is committed to doing his best. He is responsive and attentive in class. He demonstrates passion in his area of interest and has much self-motivation to maximise his potential. He shows respects towards teachers and students. He is ambitious, confident and is highly motivated to do well.