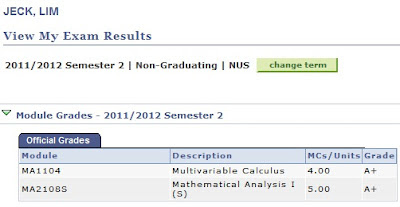 MA2108S is an S-version of MA2108 Mathematical Analysis I, and is one of the seven modules offered in the Special Programme in Mathematics (SPM) by the NUS Mathematics Department. This SPM is specially designed for a selected group of students who have a strong passion and aptitude for the mathematical sciences.  S-modules are taught in much greater depth (with lots of proof) and sophistication than their regular versions. The intake for any S-module is up to 15 students per year, hence SPM students enjoy small class (as well as top lecturers). Read more about SPM here.
Posted by Ng Bee Yong at 18:53 2 comments: 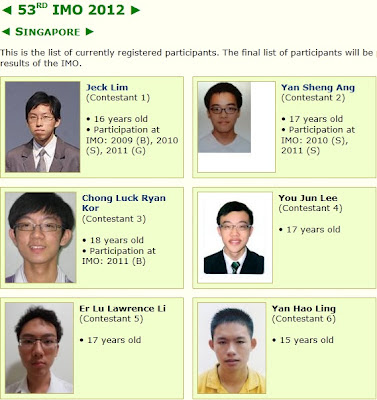 This year's Singapore IMO team comprises 4 JC2/Year 6, 1 JC1/Year 5 and 1 Year 4. Two of last year's IMO Gold medalists, who are now in JC2/Year 6, have moved to IPhO. It is difficult to predict how this year's team would fare. My prediction? 2 Gold, 2 Silver, 2 Bronze, and Country Rank - 10th to 15th (last year's rank: 3rd). However, I do hope the team can prove me wrong and is able to achieve at least equal to last year's performance i.e. 4 Gold, 1 Silver and 1 Bronze.

What is your prediction of Singapore's results for IMO 2012? Feel free to post your prediction in the 'comments', stating the number of Gold/Silver/Bronze medals and country ranking. If you feel like predicting other countries' results, please do so. I predict China and USA will get 6 Gold each, and rank 1st and 2nd respectively.

Most people know Argentina is famous for soccer. Some other interesting but less known facts about Argentina are:


Founded in 1874, Mar del Plata is a city famous for its magnificent beaches and it has a population of 450,000 inhabitants

July is Winter in the Southern Hemisphere. The average temperature expected at the time of the Competition is between 6ºC to 8ºC, or even lower, and the area is windy.
Posted by Ng Bee Yong at 12:09 4 comments:

Email ThisBlogThis!Share to TwitterShare to FacebookShare to Pinterest
Labels: IMO

Mentor's Remarks: Lim Jeck is an exceptionally bright student with highly commendable talent and ability in Mathematics and Computing. He has exhibited strong competencies in his academic studies. He may wish to enhance his communication and inter-personal skills as well, which will definitely play an important role in his future development.
Conduct: Very Good

Lim Li has just received her Year 1 Semester 1 progress report this morning. Her results are as follows:

*In progress: no grade as it is a year-long module

Mentor's Remarks: Lim Li is a cheerful and outspoken girl who will not hesitate to share her views. She is receptive to advice and is willing to improve. She brings much joy and life to her class and I hope she keeps up with this positive attitude.
Conduct: Very Good

April to June are typically the months when national team selection tests for the annual International Math and Science Olympiads (IMO, IPhO, IChO, IBO and IOI) are held, and then teams which represent Singapore will be formed. And in July, the international Math and Science Olympiads are held. Currently, IMO national team members have been selected. The results of the remaining teams will be unveiled pretty soon. I shall write about the various International Math and Science Olympiads selection process, Singapore’s performance in recent years, which are the top medal producing schools, and the possible dilemma faced by students who are capable in more than 1 olympiads. Note that for most these International olympiads, only Singapore Citizens and Permanent Residents (PR) are eligible to represent Singapore. I think the exception is IChO, where only Singapore Citizens can take part.

This is the oldest olympiad and it has the biggest participation with about 550+ participants and about 100 countries participating in recent years. Singapre’s selection usually starts with the Singapore Mathematical Olympiad (SMO) which has three sections: Junior, Senior and Open. The local competitions are held in May/June, with two rounds for each section: Round 1, and Special Round for top scorers from Round 1. SMO winners are inducted into the following Singapore IMO (SIMO) training teams: Junior team (50+ students), Senior (50+), National Team B (20+) and National Team A (10+). Trainings are held on Saturday mornings and are conducted by the NUS Math professors (for Junior team), volunteers and ex-IMO participants (for National teams). The national team is chosen from National Team A, after two rounds of selection tests which are held in April and May. This is one of the two olympiads that students can represent Singapore at any level/age (the youngest selected in Singapore’s history is a Sec 2), with the other being IOI.

The IMO competition consists of 2 days of 4.5 hours of papers, each having 3 problems. The type of questions set are in 4 broad categories: Geometry, Number Theory, Algebra and Combinatorics. About 50% of the participants will win a medal, with Gold:Silver:Bronze in the ratio of 1:2:3.  Among all the olympiads, it is arguably the hardest to get an IMO Gold, which is usually given to 1/12 (i.e. 8-9%) of the total number of participants.

Singapore’s IPhO national team selection starts with the Singapore Junior Physics Olympiad (SJPhO) – to select talented Sec 3 and 4 students for early training in the Singapore Physics Olympiad (SPhO). The SPhO is held in November for JC1/Year 5 students. Unlike SMO where there is no cap to the number of participants from each school, the SPhO limits the participation to about 15-20 students per school. Students will first take a 4-hr theory test, and the top 40+ will then make it to the practical round, which consists of a 2-hr experiment. About 20+ winners from SPhO will be selected to form the national training team. Trainings are held on Wednesday afternoons and Saturday mornings, and are conducted by JC/NUS/NIE trainers. There will be a selection test in March and 8 will be chosen to take part in the Asian Physics Olympiad (APhO), held in April/May. The APhO consists of a 5-hr theory test, and a 5-hr practical test. It serves as a training ground to sieve out the top 5 who will represent Singapore in the IPhO.

Topics tested in the IPhO include: Mechanics, Electricity & Magnetism, Waves and Oscillation, Thermodynamics, Optics, Special Relativity and some other random topics. The IPhO theoretical paper lasts 5 hours and consists of three questions, with a few parts for each question, whereas the practical examination may consist of one or two laboratory tests totalling 5 hours. About 12-15% will win Gold medals.

Similar to Physics, Singapore’s selection starts with the Singapore Junior Chemistry Olympiad (SJChO), where students who demonstrate potential will be invited to join the Singapore Chemistry Olympiad (SChO) training team. The SChO is held in November for JC1/Year 5 students. It consists of 2 rounds, one 4-hr theory paper and one practical round. In the theory round, each school can send 15-20 students to participate and the top 60+  students are selected to take the practical round.  Medals are awarded based on the combined scores of both theory and practical rounds.

From SChO, about 20+ students will be selected to join the national training team. The training is conducted every Wednesday afternoon (same as SPhO training!), by JC teachers and NIE/NUS lecturers. The selection test is held in April/May, and it comprises a theory test and practical test. 4 will be selected to represent Singapore in IChO.

This is the youngest olympiad of the lot, and there is currently no SJBO (Junior verion of SBO) to prepare aspiring students early in their foray into IBO. The SBO consists of 2 rounds – 2-hr theory paper of 200 MCQ (four sets of 50 MCQs per half hour), and practical round (4 labs, each lab is about 1.5 hours long with 2-5 activities per lab). Similar to SPhO and SChO, only JC1/Year 5 students can participate.  Top winners of SBO (usually only about 6 students) will be shortlisted for national team training, once per week. The final national team comprising 4 members will be selected in May.

The IBO is composed of a theoretical and practical element, each weighing about 50% of the final score. The theory exams cover a wide range of Biology: Cell Biology, Molecular Biology, Plant Anatomy and Physiology, Animal Anatomy and Physiology, Ethology, Genetics and Evolution, Ecology, and Biosystematics. Gold medals are awarded to the top 10% of students.

SBO/IBO questions are not released to students, but they’re all application-based questions of biology.

The IOI does not have much publicity Among the olympiads, this is probably the most low profile and MOE does not even include it in her annual press release on performance of International Math and Science Olympiads. Selection of IOI participants is through the IOI Training Workshop conducted by NUS School of Computing. Typically, trainees are selected from the Silver and above medalists from the National Olympiad in Informatics (NOI), which is held in March. There are about 10 mini-contests (which are done as part of the IOI workshop) and 3 selection tests (one of which, is the Asia Pacific Informatics Olympiad or APIO).  In 2013, NOI and APIO were considered selection tests. The top 4 participants will be selected to represent Singapore in the IOI.

Among the Science olympiads, this is the newest (in its 6th year in 2012) and has the lowest profile. Selection of IOAA participants is through The Astrochallenge held in June of each year. The top 5 participants will be selected to represent Singapore in the IOAA.

It is interesting to note that only 4 schools are feeding the participants to the International Olympiads, in the last 5 years. They are namely, Raffles Institution (RI), NUS High (NUSH), Hwa Chong Institution (HCI) and ACS (Independent).  We could say that in terms of Math and Science competitions, these 4 schools  are considered the best performing high schools in Singapore.

The total number of medals (excluding HM) won by these 4 schools in IMO, IPhO, IChO and IBO (excluding IOI and IOAA) in the last 8 (updated 2014) years are as follows:

In 2013, NUSH, RI and HCI won 6 Gold, 3 Gold and 3 Gold respectively in the International Math and Science Olympiads.

In any one year, with the exception of IOI and IOAA which may be held in August or September, theoretically a student can only participate in one of the IMO, IPhO, IChO and IBO. This is because these 4 competitions are held in the same month of July, and also intensive training for each competition starts in May/June, all the way till the competition. It is not uncommon for students to be talented in two of the Math and Science olympiads, e.g. Math and Physics. Hence, students capable in olympiads often face the dilemma of selecting only one of these few. The decision has to be made early (before the national team is formed), since the national team training (as in Chemistry and Physics training), competitions and selection tests may clash. Even if there is no clash, it is important to focus on just one olympiad otherwise even if you are good, you may end up not be in either national teams.

Since students for IPhO, IChO and IBO are typically selected from the JC2/Year 6 students, students who eventually participate in 2 or more international olympiads are likely to take IMO or IOAA prior to JC2/Year 6, and one of the IPhO/IChO (IBO less likely, since it is non-Math related) in JC2/Year 6.

The Singapore IMO 2012 national team selection test (NTST) results are out. The following are the top 6:

The 6 students will be representing Singapore in the 53rd International Mathematical Olympiad (IMO), which will be hosted by Argentina, to be held in the city of Mar del Plata from 4 to 16 July 2012.

All the best to the Singapore IMO Team 2012!

﻿﻿ Lim Min did exceptionally well for GP in the recent common test, where she scored in the 88th percentile. Hopefully she can keep it up. She will need to work harder for Economics, as her grade was just below the 50th percentile. For Math, she performed as usual. She did fairly well for Chemistry and Physics, but I think she could have done better, based on her capability and past performances.
Posted by Ng Bee Yong at 12:49 No comments: