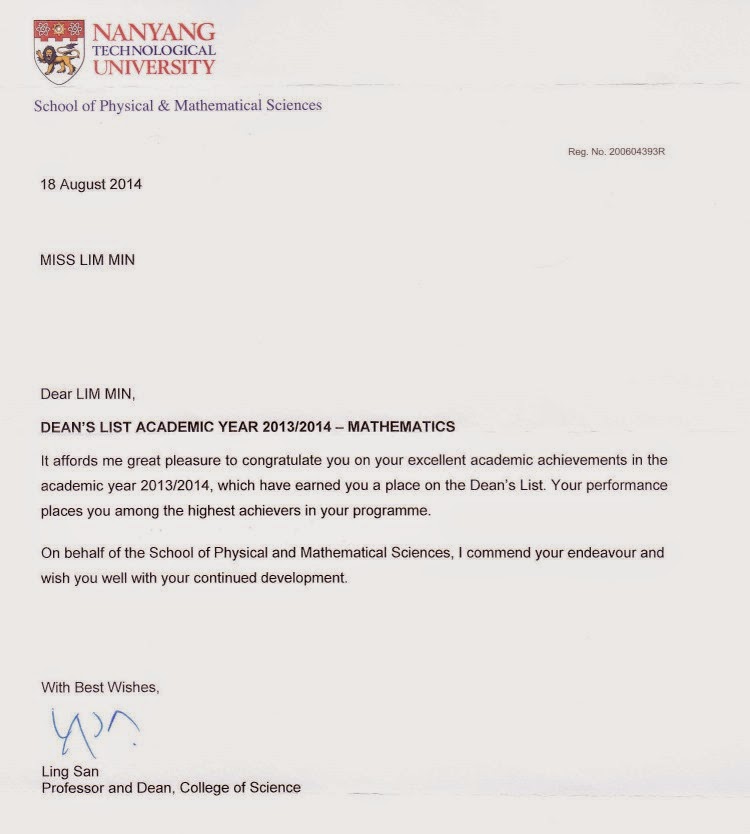 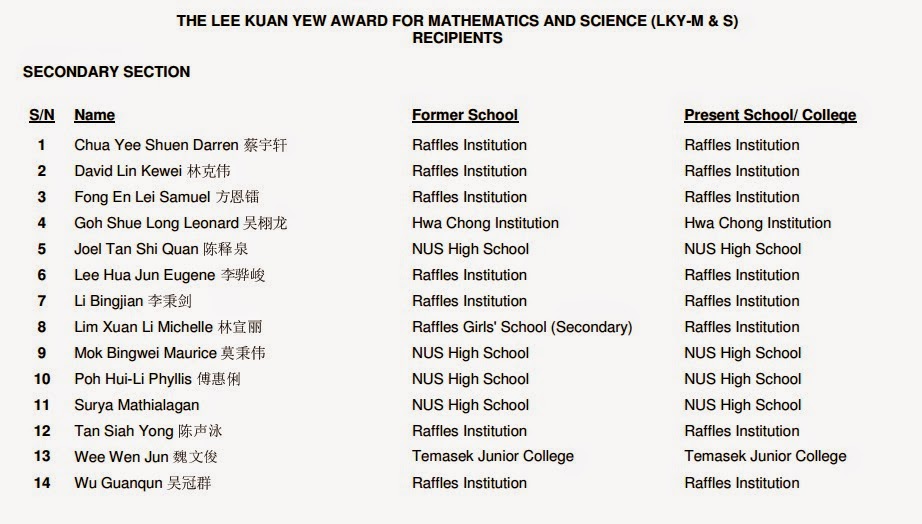 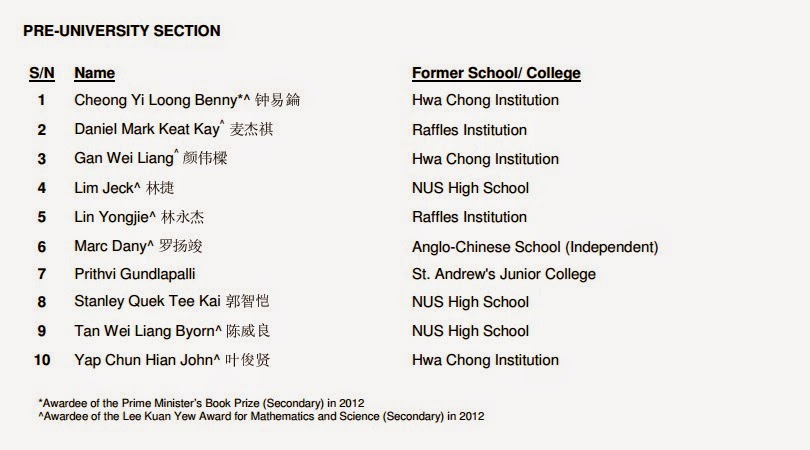 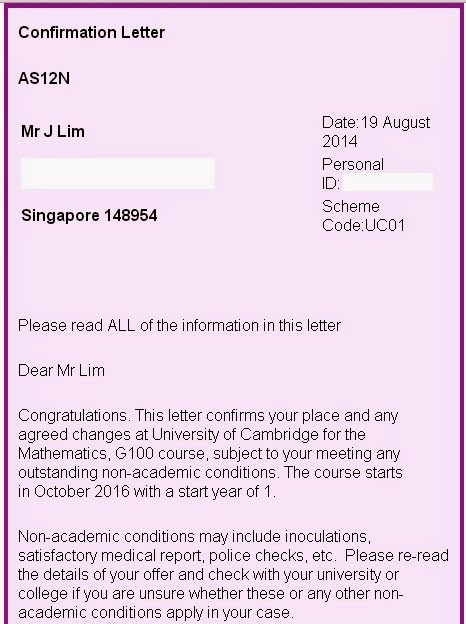 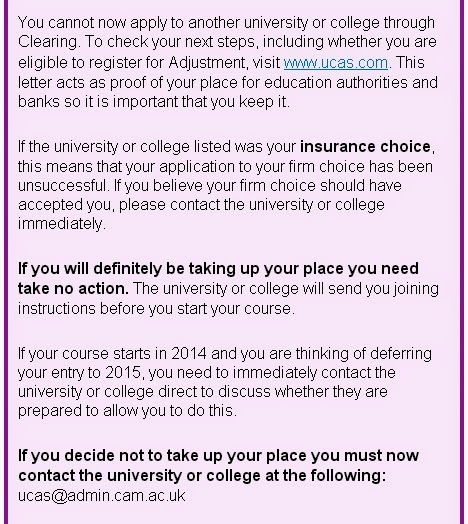 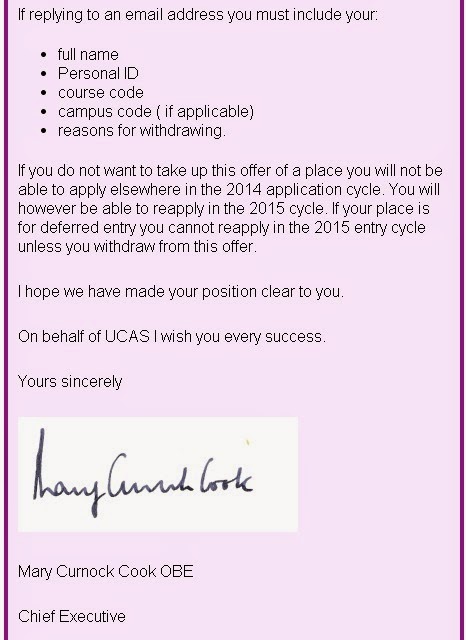 Congratulations to the Singapore Team for winning 6 Gold 1 Silver 1 Bronze.

Email ThisBlogThis!Share to TwitterShare to FacebookShare to Pinterest
Labels: CWMI

I like this article.
1. Koh Boon Hwee is a familiar name, I have read much about him from the papers since my younger days. And he is a talented and unassuming man.
2. Who says one needs to be either a doctor or lawyer to succeed in life? Just look at Koh Boon Hwee.
3. Many people don't really know that they are destined for life in their early adulthood e.g. during their high school or undergraduate days. It is good to just follow their heart, to study what they have the most passion for. For scholarships, taking a bond-free one is preferable. Lim Min is currently on bond-free Nanyang Scholarship. I hope Lim Jeck can get a bond-free scholarship too, to pursue his undergraduate studies (likely, in Cambridge). In the future, if my kids do well in life, I would like them to contribute back to the society, just like what Koh Boon Hwee has been doing.
4. I really like what Koh Boon Hwee says, at the end of the article
-  “A lot of people in today’s world decide what they want to do based on what they think they are going to get compensated for. And some of them grow to love the job, which is fine. A lot of them don’t, and then they’re actually not very happy. I think that’s a tragedy. Life is too short for that sort of stuff.”

That’s why he decided not to be a doctor and became a corporate head honcho instead
Straits Times Aug 10, 2014

Mr Koh (above), 63, chairs the board of trustees of NTU and is credited for overseeing its growth into an internationally recognised research university. Mr Koh receiving his honorary doctorate from Sir Keith O’Nions, rector and president of Imperial College London, earlier this year for his contributions to education. — PHOTO: NG SOR LUAN
By Wong Kim Hoh, Senior Writer

Over a two-hour chat with Koh Boon Hwee, one learns three key things about the corporate titan.

Mentor’s wise words
“One day, I jokingly asked Bill if I should give up the idea of university and continue working for Arthur Young. He looked at me and said: ‘You are fired. No matter how attractive it is, you have to go to college.’ He did not promise me a job after I completed my studies either. He said if I went back, people would say he favoured me. He told me it was important for me to see what was out there and learn to make it on my own. We became friends for life.” - MR KOH BOON HWEE on his mentor William Schroeder, who died a couple of years ago
Don’t try to keep up with the Joneses
“We shouldn’t get caught up with wanting to make sure that whatever we do in life, we want to have the approval and adulation of other people. There is always someone better. If you are famous, there is someone more famous, with a bigger Twitter following. If you are good-looking, there will be someone better-looking. You will never be happy. The important thing is to be happy with what you have. If you wake up every day measuring and comparing, life can’t be much fun. - MR KOH on contentment
Posted by Ng Bee Yong at 09:28 No comments:

Off to Guangdong Province, China

The girls left for China Girls Math Olympiad 2014 this morning. They will be staying in Zhongshan High School's dormitory throughout the trip. 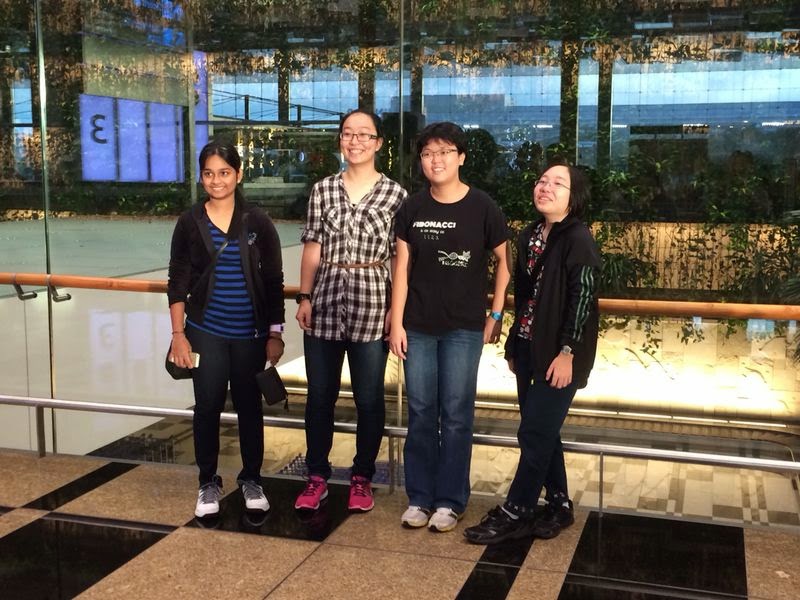