Chance of Being Selected for IMO

In China, about 200,000 participants will take part in the national China Mathematical Competition held in October every year. Out of the 200,000 participants (and some more from CWMO and CGMO), eventually 6 will make it into the China IMO team. The chance is about 0.003%.

Therefore, it is 100 times harder to get into the China IMO team than to get into the Singapore IMO team! I won't be surprised if there are young Maths talents in China who may be able to beat Terence Tao's (Australian) record of being the youngest IMO Gold medalist (at 13) but unfortunately due to the stiff competition, they can't make it into the China IMO team (top 6) earlier!
Posted by Lim Jeck at 17:17 2 comments: 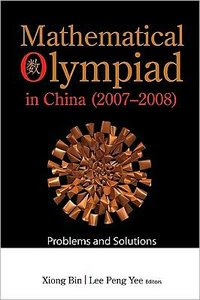 In China, every year in October, there is a national China Mathematical Competition, from which about 120 students are selected to join the Chinese Mathematical Olympiad (CMO), in January the following year. CMO lasts for five days, and the format and difficulty of the problems mirror those of the IMO - a 2-day competition where participants solve 3 problems each day in 4.5 hours. From CMO, about 20-30 students are selected to form a national training team.

Because of the differences in education and culture, Maths competitions in the Western part of China do not develop as fast as the eastern part. To promote Maths interest in the western China, the China Western Math Olympiad (CWMO) has been conducted since 2001, and the top 2 winners are invited to join the national training team.

From 1986 till a few years ago, the China team did not have any female trainee. To encourage more women to join the Maths competitions, since 2002, the China Girls Math Olympiad (CGMO) has been conducted to select female students gifted in Maths. Again, the top 2 winners are admitted directly into the national training team. The winner of CGMO 2007 joined the national training team in 2008 and she won a Gold medal for China in the 49th International Math Olympiad (IMO) held in 2009!

The China national training team undergoes intensive training and a 2-week Maths camp. After 6-8 tests, plus 2 qualifying examinations, 6 students are finally selected to form the national team, to take part in IMO in July that year. With a very huge pool of participants to select from, dedicated & experienced coachers, perservering & talented trainees and numerous stringent selection rounds, it's no wonder the China team has been doing very well in the IMO. Since 1985, China has taken part in the IMO 24 times (she missed the IMO held in Taiwan in 1998!) and has won the top ranking for countries 15 times! 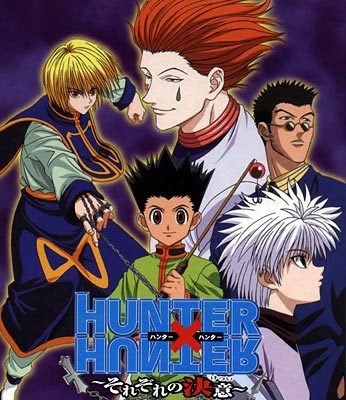 Hunter x Hunter is a nice and cool Japanese comic/anime! It is about Gon Freecss (the boy dressed in green), who one day discovers that the father he had always been told was dead is actually alive and well. He learns that his father, Ging Freecss, is a legendary, top-notch Hunter. The fishing rod (see picture) belongs to his father and is quite useful to Gon throughout his journey to look for his father.

Gon leaves home to take the Hunter qualification exam, where he meets Kurapika (the chain dude), Leorio (with tiny black specs) and Killua (white-haired). The four of them become good friends, while going through the grueling exam to get a Hunter license. Each year, less than one in a hundred thousand can pass the exam.

Kurapika has scalet eyes which are very powerful and will automatically surface when he is agitated. He wants to kill the Phantom Troupe for some reasons that are too long for me to narrate here. He looks like a girl but is a boy.

Leorio wants to be a doctor and loves money alot. He is kind of dumb and loves to shout and quarrel with Kurapika. He hates Tonpa, the Rookie Crusher, whom he met in the Hunter exam.

Killua is from a family of elite assassin. During the exam, he plucks a criminal's heart in a split second and crushes it. He says his skill is only elementary and that his father can take out the heart without any traces of blood. He is the only one of the four good friends to fail the exam in the final phase as he kills someone on impulse, agitated by his brother (Illumi)'s taunting remarks.

There are so many things to say about this story with its many fascinating characters (e.g. Hisoka the creepy magician, Illumi, Chairman Netero, Honzo the baldie etc) and unique storyline. So just go and watch or read it. It is really a very absorbing story. Even my mother is addicted to watching it. Of course that includes the 3 of us. 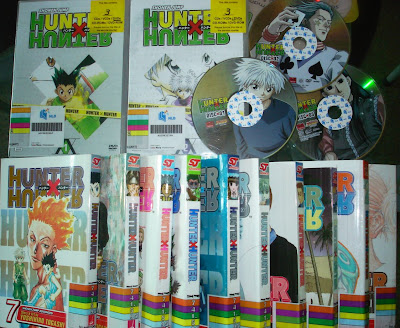 Above picture: Hunter x Hunter DVDs and comic books which we borrowed from the library. Each DVD has 5 episodes in it and each DVD box contains 3 DVDs. We had borrowed volume 1 and 2 from the library (the only 2 the library has) which totaled 30 episodes, from the beginning to the end of the Hunter Exam. That is from comic book 1 to half of book 5. But the DVDs have extra scenes that the comic book does not have. The library has up to book 25. The beginning (1st episode) is kind of boring but from the time when Gon begins to journey towards the venue of the Hunter exam, it gets very exciting and entertaining. When we went to Jurong Regional Library to borrow, initially we couldn't find the DVDs in the Young People DVD anime section where other anime such as Inuyasha and Naruto were located. But later we found the Hunter x Hunter DVDs in the Adult DVD section, which was kind of wierd!!
(posted by Lim Min)
Posted by Lim Jeck at 09:14 No comments:

Email ThisBlogThis!Share to TwitterShare to FacebookShare to Pinterest
Labels: Comics and Anime 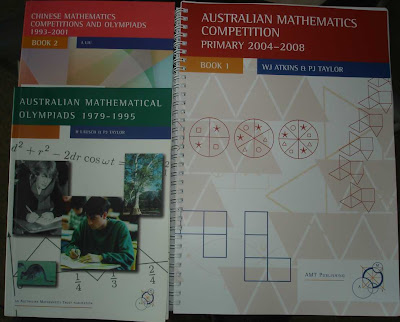 My mother exchanged the book vouchers which we won in the Australian Maths competition, for the above 3 books. The green one (Australian Maths Olympiad) is lousy. The solutions are too whacking, there are many errors and two of the questions are exactly the same (1982 & 1986). Buy it at your own risk.
The giant red ugly, hideous, with ridiculously simple questions and costly (if without voucher) book is for my younger sister.
Posted by Lim Jeck at 12:31 No comments:

A to Z Transformation 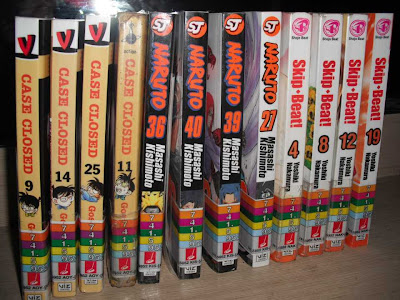 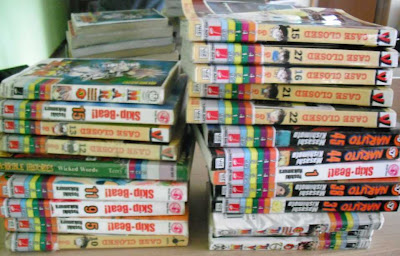 If you can't find some comic books in the library, here is where they have gone to. My sisters wanted the Skip Beat comic books, not me. I only read Naruto and Case Closed. We have been reading comic books every day.
Posted by Lim Jeck at 20:26 No comments: