There will be a class gathering for 6A'07 on 4th December (Tuesday) from 4pm to 10pm. For more details, look out for a mail in your letter box these few days. There will be an invitation sent to you from ma'am. Anyway, it will be held at my house, like the previous time. Venue: Queens Condominium Function Room, Stirling Road. Please bring your swimming suit + towel (do not go inside the pool with home clothes lest the security guard will scold) and an extra set of clothes as there will be water games! 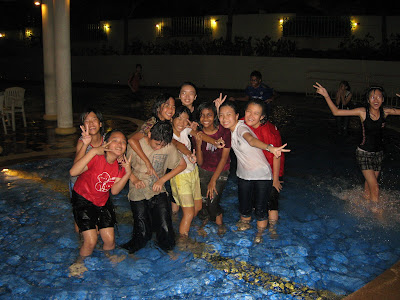 The photo above was from Yu Hui's blog, taken during the last gathering.

I have also booked the badminton court from 7 - 9 pm. Be sure to turn up! I expect a wide turnout!

Hooray! I can't believe that I got 263 for my PSLE! I always thought that it would be 250. My sister got 265 last year. I actually want to beat her in the total aggregate. I think that I am just very lucky that this year's Maths and Science papers are so much more difficult that last year's and the English and Chinese are so much more easier. That is why I got 263. If I were to take last year's PSLE papers, I would get only 250. Last year, in order to get the EESIS scholarship, the PSLE aggregate must be at least 262. This year, it is 265, I think. I am so close into getting the scholarship. If only I have made lesser mistakes, I would have saved a few thousand dollars (to be exact, $14,400, i.e. $200 per month x 12 months x 6 yrs)!
Posted by Lim Jeck at 16:13 1 comment: 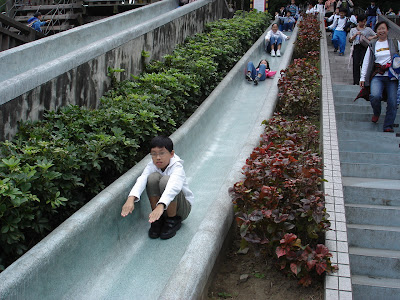 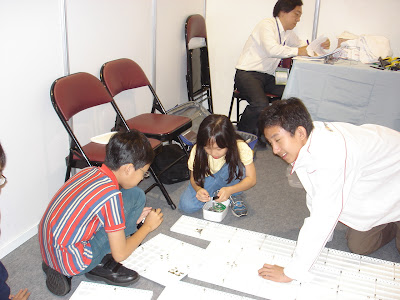 On the first day, we (Lim Li, my mother and I) caught the 5.15 pm SQ 28 flight. The flight took about 4.5 hrs to reach the Taiwan-Taipei Tao Yuan International Airport, and we reached the Chien Tan Overseas Youth Activity Centre (our hotel) at about 11 pm. So, we hardly did anything. My father, Lim Min, Derek and Jeremy Sim (Clarence's brother) took an earlier flight, since they were taking part in the WRO 2007 (World Robot Olympiad). I had no idea what they did earlier at the hotel (perhaps preparing for the competition). 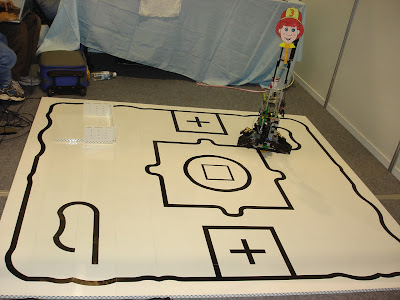 Second day, the start of the competition. All of us went to the competition venue at National Taiwan University (NTU Sports Centre). Our robotics team was assigned the J03 booth. The team beside our booth was really awesome. They were from Philippines and I thought we had no chance against them. I just looked around to see what the other teams (from some 13 countries) were doing. By the way, I saw a robot that is able to solve 3x3 rubik's cube. I was really impressed. I also saw a robot with a "remote control". I tried to challenge the rubik's cube robot, but the robot had problems scanning the colours correctly. The judges soon came to our robotics team booth. Lim Min, Derek and Jeremy gave a presentation and demo of their fireman robot to the penal of 3 judges, who asked a lot of questions. 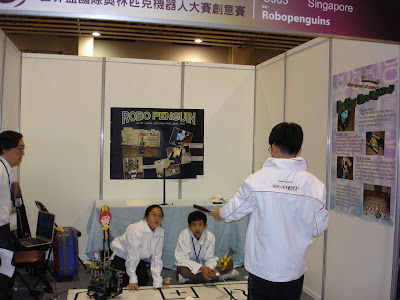 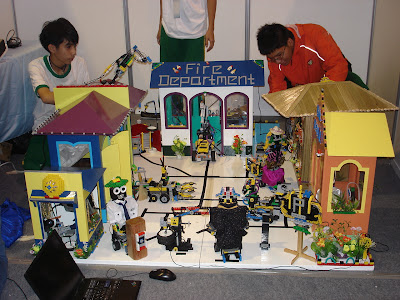 Our neighbour's booth from the Philippines which looked pretty impressive!


At about 5 pm, we left and returned to our hotel. At night, we walked to the Jian Tan Metro Station and visited the Shilin Market which was just across the station. We noticed that in Taipei, the cars didn't stop for the pedestrians even when the green man was flashing, it was so scary to cross the road. The green man flashed for 99 seconds for us to cross a short road (unlike in Singapore, which is like 10 seconds or so). The Shilin market was extremely crowded, I hated all the hustle and hustle of the market, and we quickly left after having our dinner. Derek and Jeremy "da-bao" the oyster mee-sua back. 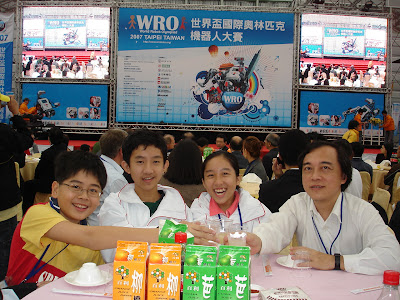 Third day, competition was still going on. I challenged the rubic cube robot again. That time the robot worked. I won the first round. On the second round, I lost. My excuse was because the creator was the one who messed up the cube. Third round, I messed up the cube for the robot. I won. I went back to our booth. My father was trying to sell the omniwheels/holonomic wheels and the plego fields invented by him. At the end of the day, my father managed to sell ALL the holonomic wheels he brought (about 100 of them). During the prize giving ceremony, they announced the winners. Our team emerged second in the Open Category! If we got second, who got first? I'd give you a hint, it's from Philippines. It's not the team beside us (surprisingly they didn't win any medal), it's the team beside them. After the ceremony, we went to a National Palace Museum （故宫）. There's nothing much to talk about it, so I would just skip to the part when we went back to the hotel. Well, there's still nothing much to talk, so I'll talk about the next day. 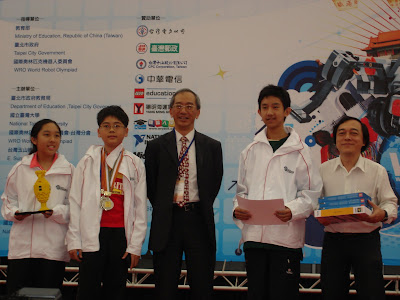 Fourth day, we visited one of my mother's relatives. After that, we went to Taipei 101. It looked so grand and tall. It was one of the most famous buildings in Taiwan. Yet, inside it was just like any shopping mall. After that, we bought food from the Taipei Shilin market before going back to the hotel. 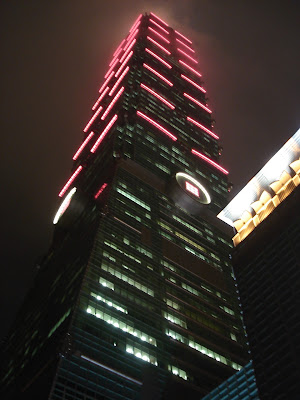 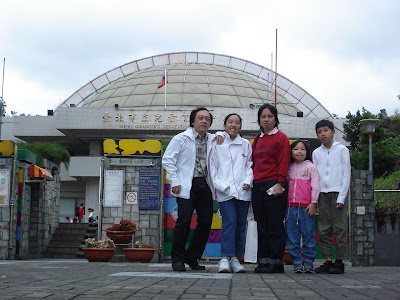 Fifth day,(yay, I'm almost done) we went to the science centre... and I lost my specs. We searched high and low for it. We wasted so much time. If we didn't reach the airport on time, we would miss our flight home. We just gave up after a while and took a cab followed by coach to the airport. We reached home at exactly midnight.

The best thing about this trip was ... we got to play video games in the SIA aeroplane for a total of about 9 hours.
Posted by Lim Jeck at 20:21 No comments:

It took me quite a long time to master the 3x3x3 rubik's cube. Natasha can also solve it. I finally am able to remember the steps to do it. Initially it took me at least 5 minutes to complete it, now I can do it in about 3 minutes. 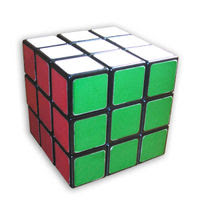 Just a few days ago, my mother bought me a 4x4x4 rubik's cube (Rubik's Revenge). I didn't ask her to, but she bought it anyway. It cost $23.90 while the 3x3x3 cost only from $1 (lousy quality) to $9.90 (Rubik original). The steps were rather complicated but I still managed to complete it. Now my record is about 10 minutes. 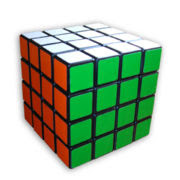 Yesterday, my mother bought another one. You've guessed it, it's 5x5x5 (Professor's Cube). There was no solution booklet that came with it and the cube itself was rather uneven or crooked, and difficult to turn. It cost $27.90! Every turn I made, my hand hurt. However, I applied some of the 4x4x4 rubik's cube rules to solve it. It took me like 3 hours to complete it for the first time! Now I can solve it much faster (less than 30 minutes)! 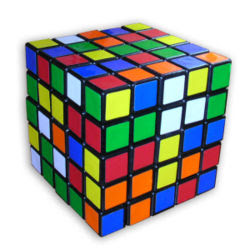 Anyway, there are still so many more kinds of "rubik's cubes", as you can see below. 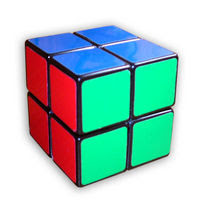 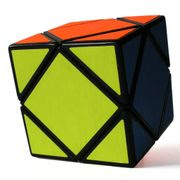 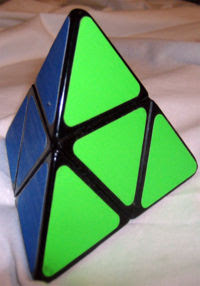 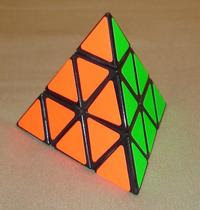 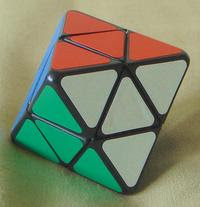 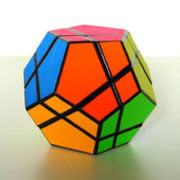 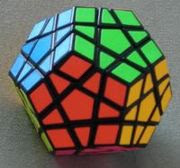 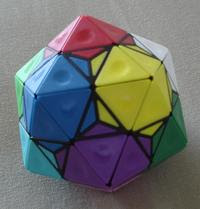 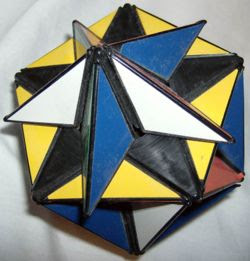 Do you know that there's no such word as "barbeque"? I've checked the dictionary, "barbecue" is the correct spelling. Why am I talking about this? Let's take the time machine and go back 1 day ago.

It was only 2 o'clock in the afternoon and some of my older sister's friends had arrived. None of my friends were here yet. I received my first call at 3 o'clock. It was Jonas. He told me to meet him at the back gate. I rushed down to the front gate but saw nobody. 3.15pm, Jonas had not come. 3.25pm, still nobody. Impatient, I went up again. Just a minute later, or perhaps less than that, Jonas called and said he was already there waiting. I couldn't believe it! I went all the way down again and brought Jonas up. Luckily, he brought some drinks, or else I would be wasting my time :).

Later, a whole bunch of my friends came and the whole computer room was packed like sardines. The girls stayed in my parents' bedroom to watch DVD (Death Notes, I think). At about 6 pm, we went to the barbecue pit at the roof top of clubhouse to... barbecue. I thought that we booked the badminton court from 6-7, so I rushed down from the clubhouse and went up to the 8th floor of my block to get the badminton rackets. The door was locked as no one was at home! I went to the function room to look for my mother to get the keys. Since she was not there, I went up again to the BBQ pit to look for her. She said that she booked the badminton court from 7-8, not 6-7! So tiring ...

At 7 pm, we went to the badminton court to... You should know what. After a while, Haixiao just switched off the lights. I didn't know why, but we couldn't seem to switch it on again. So, we had to play in the dark, but at least we still could see a little.

After the badminton game, we went up to my house to play computer games again. All my friends left by 10 pm.
Posted by Lim Jeck at 17:47 No comments: