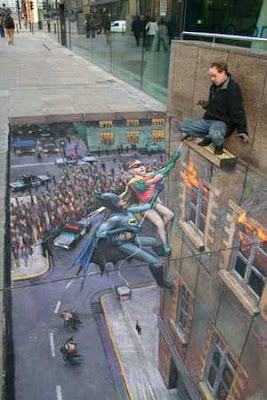 This amazing chalk art is created by Julian Beever, who has spent 20 years creating pavement art in Europe, USA and Australia. He has the nickname the 'Pavement Picasso'. Many of his creations are optical illusions, such as this one, where Julian appears to be perched on a ledge, waiting for Batman and Robin to climb the building and rescue him.

In reality, there is just pavement in front of him, and the street below together with the expectant crowd, plus the blazing building below him, are all tricks played on the eye.

While many of his pictures can take a whole day to create, by the next day they are often gone, vanished under the feet of passing pedestrians.

This is the 4th week of Semester 2. The following are the modules that I am taking, from most-like to least-like:

1. MA1201 IT in Mathematics & Loci. I learn to use the Geometer's Sketchpad (GSP), a software system for creating, exploring and analysing Maths. It's fun. I can also play with the GSP's features like animation, whenever Ms Joyce Ng is not looking.
2. MA3103 Trigonometry II. This module is quite easy, much easier than the Maths Olympiad's Trigo topic. Mr Sean Yee is just like one of us (some people think he is a student), and his explanation is clear.
3. MA4204V Number Theory. This is the most challenging among the Maths modules that I am taking now and I like it.
4. MA3113 Functions and Graphs. Mr Li Da speaks with a weird accent and I think no one understands him. But I just refer to the notes, which is good enough for me.
5. PC1104 Forces, Moments and Energy. It's just like Maths, in a scientific way.
6. CM1105 Atomic Models. This is also like Maths, as we learn to find the number of protons, electrons and neutrons.
7. FA1110 2D Basic. I learn to draw using charcoal. It's new to me.
8. MU1341 Group Keyboard for Beginners. This is an enrichment module, where I learn to play on the keyboard since I have no background in keyboard playing.
9. BL1102 Diversity of Life. This semester the Biology module is not as interesting as last semester's.
10. EL1104 Developing Language Skills II.
11. PE1102 Physical Education
12. CL1102 Chinese 1B.
13. HY1101 From Settlement to Singapore (1300s to 1970s). Last Semester Geography is my hatest subject. Now I know History is even worse. I hate memorising.

This is an interesting illusion ... I watched this on TV many years ago, it was one of the best tricks I have seen.

Today I saw some NUSH seniors at the SMO Open Section Round 2 (held at NUS) but I was too shy to talk to them since I didn't know them very well.

Round 2 was a complete "torture", though not as bad as attending Chinese lessons :-). I stayed inside the LT25 for more than 3 hours (it was a 4-hour paper), but I could only do 1 question out of the 5. Actually I did 2 questions, but the other one was probably wrong. My mother said that it was already an achievement for me to get into Round 2 of the Open Category competition and to be able to do 1 question, since the competition was more for JC students.
Posted by Lim Jeck at 22:14 No comments:

When Petrol Price Goes Up

This is what may happen on the road if the petrol price keeps going up and up ....