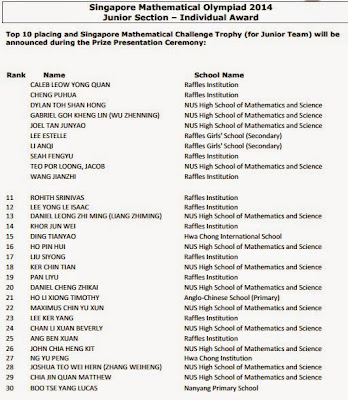 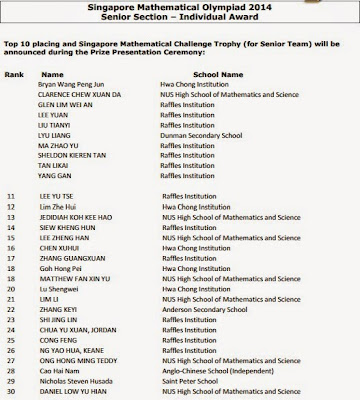 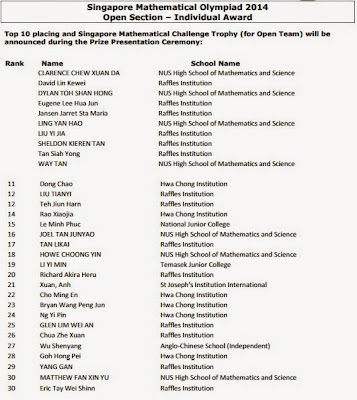 Congratulations!
Posted by Ng Bee Yong at 06:43 No comments: 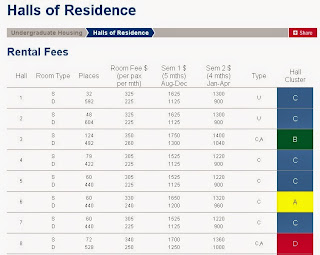 Selection and Training of SIMO Junior, Senior and National Teams

The selection and training of the Singapore IMO team is the responsibility of Singapore International Mathematical Olympiad (SIMO) Committee. Members of the SIMO are the NUS Department of Mathematics professors, Ministry of Education (MOE) officials and high schools/Junior Colleges teachers (currently, we have teachers from RI, HCI and NUS High in SIMO). To prepare students for the IMO, SIMO runs 3 training teams: Junior Training Team, Senior Training Team and National Training Team. Only Singapore Citizens and Permanent Residents are eligible to be selected into the training teams.

The SIMO Junior Training Team members are selected based on students' performance in the SMO (Junior) competition held in May/June each year. Most of the students selected are Sec 1 and 2 students. The SIMO Junior team takes in about 50 students each year. As each student can be trained in the Junior Training Team only once, and non-SC and non-PR students are not considered, I would reckon that those eligible and who are ranked among the top 100 or thereabout in SMO (Junior) should be able to make it into the team. The training is focussed mainly on basic Geometry concepts.  As more primary school students are taking part in SMO (Junior), we do have a few primary school students (typically P6 students, this year we even have a P5 student) who manage to get selected into the Junior Training Team every year. Training is conducted on Saturday mornings, from July to August/September. There are about 5-6 training sessions, and a test will be conducted on the last session; those who do well and who display good attitude during the training (e.g. make effort to complete homework and take home test) may be invited to join the Senior Training Team.

Besides getting members from the Junior Training Team (as mentioned above, from the SIMO Junior team selection test), the SIMO Senior Training Team also selects its members from those who did well in the SMO (Senior) and SMO (Junior) competitions (for those who had attended Junior training team before). The SIMO Senior team takes in about 30 students each year. Preference is given to the younger students who have the potential to be selected into the National Training Team in Year 5 and below. For instance, if we have one Sec 3 and one Sec 4 student who just meet the COP for the Senior Training Team, the former and not the latter may be selected. Students may join the Senior Training Team more than once.  The training will be held in January to April in the following year. Sometimes the training may commence earlier, in October/November.

Currently, the 6-member IMO Team is selected through two National Team Selection Tests (NTST) organised by SIMO. In the first NTST held in April, students have to solve 4 problems in 4 hours. In the second NTST held in end April or early May, it is comparable in difficulty to the IMO and are fashioned after the IMO - the test consists of two 4.5-hr papers in 2 days, with 3 problems in each paper. The top 6 scorers will be announced 1 week after the second NTST, and they will represent Singapore in the same year's IMO. These students will undergo further rigorous daily training until they leave for the IMO in July.

SIMO also organises an all-expenses-paid one-week residential training camp during the June school holidays for the National Team as well as the Senior Team. Accommodation in hostel and all meals (up to 5 times a day) are provided. A typical day begins with lectures and problem solving sessions after breakfast. These will continue after lunch. In the evening campers take part in various sports activities. After dinner, there are also talks and other organised activities. The camp provides a chance for the various groups of trainees to get together. This is also a homecoming occasion for the x-men. Through various interactions, the trainees can learn from the x-men their past experience at the IMO, national service, application of university, scholarships and so on.

Congratulations!
Posted by Ng Bee Yong at 08:21 No comments: 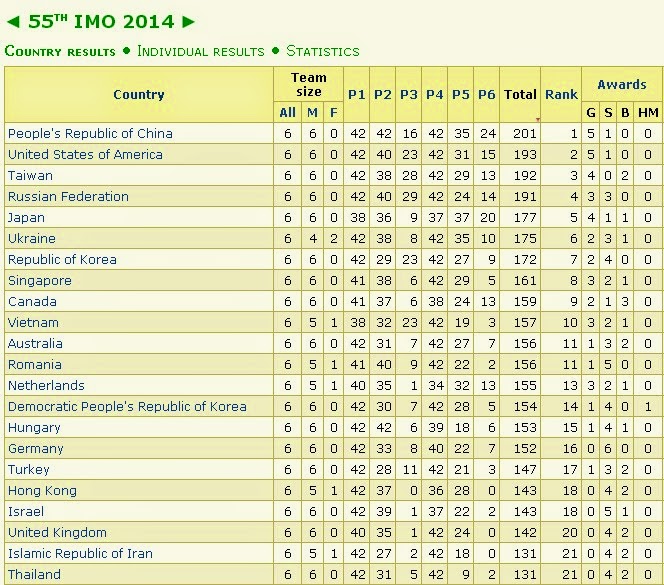 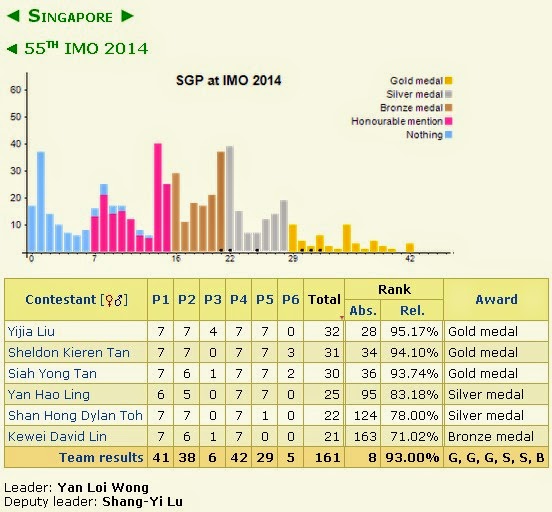 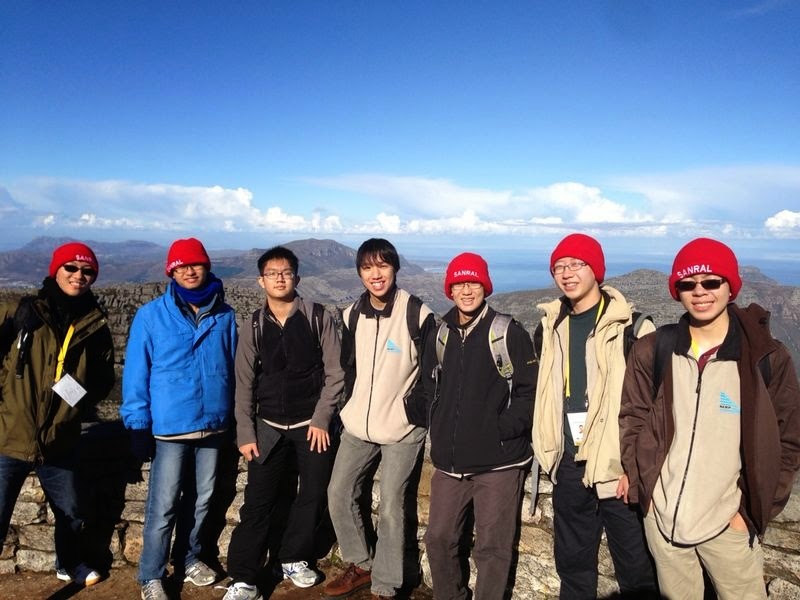