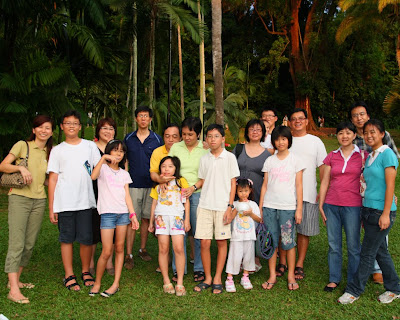 We had a gathering for families of the Year 2s yesterday afternoon, organised by the NUSH PSG (year 2 reps). It was a picnic at the Botanic Gardens, near the Symphony Lake. As you can see from the photos (courtesy of Kendrick's father), not many people turned up. The following people were at the gathering - Kendrick & family, Rania & family, Cheryl's parents, Jordan's (205) family and my family. I think the parents of a 202 student also came. It seemed that families from 203 formed the majority. There were lots of food, like mee-siam, Japanese rice with seaweed, fried chicken wings, chicken shreds with mushrooms soup, meat balls, fish balls, corn pudding, tidbits, packet drinks. Some of us played cards, while the adults chit-chatted with each other, sharing stories (complaints on classes, teachers and students?). 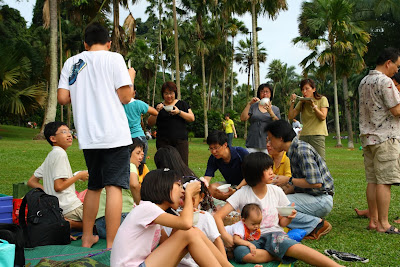 Today is the only Saturday that I don't have IMO training, as there is the SMO (Junior) and SMO (Senior) Special Round. I met some of my NUS High friends at NUS LT25, like Kendrick, Jonathan and Yao Rui and other friends like Jethro (RI) and Benny (HCI). After the super long 3 hours, I did all 5 questions. Ryan Chan and Kang Zi Yang (RI) took the Senior test and managed to answer all questions too. My sister took the Senior test and she did 3.

Monday is already the start of Term 3. I wish it would start earlier, since I don't have to go to school anyway. I think I will go back to school in the morning before training starts. So in other words, I have 2 weeks of training left, and after that, I will be in Germany for 2 more weeks, and perhaps after that, I might be quarantined at home for another week, for getting H1N1 or if Germany become one of the affected countries. In total, I would miss more than a month of school.
Posted by Lim Jeck at 14:21 No comments:

Mozart In the Office

Creative music!
Posted by Lim Jeck at 08:44 No comments:

The 50th International Mathematical Olympiad is less than 1 month away. Here are some interesting facts about the IMO:

a) The first IMO was held in Romania in 1959.
b) Since 1959 the IMO has been held every year except 1980 - it was cancelled due to internal strife in Mongolia (will this year's IMO be cancelled due to H1N1?)
c) Singapore first took part in IMO in 1988.
d) China is the only nation that won IMO all-member-gold for multiple times (8 times).
e) Terence Tao (Australia) won a gold medal at the age of thirteen in IMO 1988, becoming the youngest person to receive a gold medal.
f) Singapore won her only gold medal in IMO 1996. It was won by Thevendran Senkodan from RJC.
g) Christian Reiher (Germany) is the current top contestant in the IMO Hall of Fame, winning 4 gold medals and 1 bronze medal. Reid Barton (USA) is second, with 4 gold medals.
h) The only country to have its entire team score perfectly (score: 42/42) on the IMO was the United States, which accomplished this remarkable feat in IMO 1994.
i) The easiest IMO must be the IMO 1987, as participants must score a perfect 42 to win a gold medal. Someone who scored 41 was ranked 23rd in that IMO.
Posted by Lim Jeck at 18:47 1 comment:

First day: we ate, did some math problems, ate again, did more math problems, ate, then slept. As you could see, we were always eating and solving math problems. Ryan Chan was my room mate. The food was not very nice as some were spicy and there was no chicken rice (my favourite). The hostel room was as bad. The bed was hard and the toilet was very tiny, probably it only had the length and width of a normal room door's width. At night, we, I mean they (senior team and national team, minus the 6 of us in the IMO team), had ice breakers.

Second day: we ate, did some math problems, ate again, did more math problems, ate, then slept. (I copy-and-paste from first day, as the schedule is quite similar). At night, we had a talk by the X-men, not the wolverine one. X-men are people who have participated in previous IMO.

Third day: we, I mean they, had their vertical training, where they were given 4.5 hours to solve 10 questions in a group. The hardest questions were 8 and 10, but 8 seemed to me like an easy problem. At night, we had an amazing race, which I failed miserably.

Fourth day: we had our first quiz, which was a disaster. Q2 was an extremely easy problem but everyone except Aidi got 0 for that particular question. At night, we had a talk by Jun Wei, one of the younger X-men, about his trip in IMO.

Fifth day: we had our second quiz, which was also a massive failure. In the evening, we had a buffet at a certain NUS bistro/restaurant. According to Ryan, the buffet cost only $15 per person, no wonder the food was lousy and not appetising. Then we went back to the hostel. We stayed in the music room until 12 midnight. Actually, at 11pm, all the gates and doors would be locked and no one could enter or exit, but ingenious us put a slipper at the music room door so it could not close.

Sixth day, which is the last day, we, I mean they again, had their oral quiz in the morning (we conducted the quiz), which was about mine sweeper. After lunch, we packed and left the hostel room for good, no ... not until I reach year 5 (when 1-year hostel stay is compulsory for NUS High students). 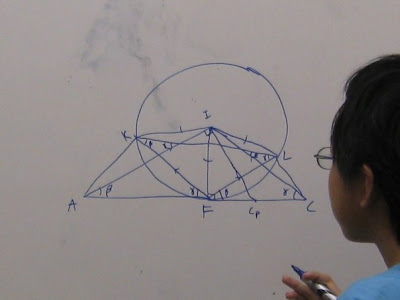 Photo of me solving a geometry problem, courtesy of Shi Fangying (RGS).
Posted by Lim Jeck at 17:28 1 comment: 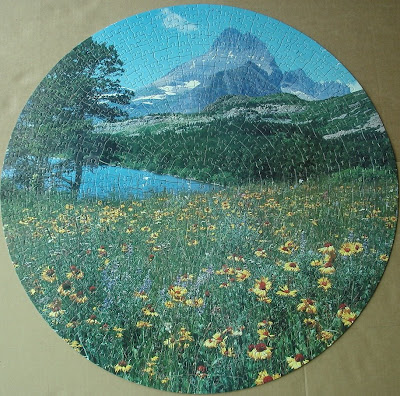 This is a 900-pc round puzzle, which I have completed over a few days (1-2 hrs per day). My mother said she fixed this puzzle with her two younger sisters when they were teenagers, like 30 years ago! Recently, she got it from my 7th aunt.

I think it is harder than the normal rectangular shape puzzle as it is difficult to look for the edge pieces (some inside pieces also have similar almost-straight edges), and there are no corner pieces.

I took the SMO Open today. Like the Junior and Senior papers, this year's Open paper is also harder than the previous two years'. I am sure I scored less than Ivan. Here are my terrible answers:

As you can see, there are more '?' than the junior paper although it has less questions, which means I failed more than the junior paper. Also note that none of the answers or questions have the numbers 26 and 7(actually it has the number 7 since it is such a common 1-digit number), which means it was not set by Mr Teo. Also note that there are 2 answers with 2009, 1 answer with 1, 1 answer is 2 and 1 answer is 2008.
Posted by Lim Jeck at 19:18 1 comment:

This year's SMO (Junior) is harder than last year's, or 2 years ago's. I also made many careless mistakes, as many questions need tedious calculations so I did not have time to check any question. I failed totally this year! Here are my answers:

Notice the number of answers being 26 or 7? I am very sure that some of the questions are set by Mr Teo. Many questions also have the numbers 26 and 7 in them.

Can someone who has taken SMO (Junior) or SMO (Senior) [taken by my sister this year] share your answers in the comments field?
Posted by Lim Jeck at 16:59 7 comments: