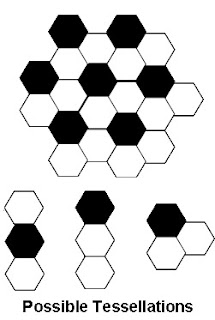 The picture above is self-explanatory. The approx. ratio of the number of black tiles to the number of white tiles is 1:2.
Posted by Lim Jeck at 18:37 1 comment:

The Harvard-MIT Mathematics Tournament (HMMT) is an annual math tournament for high school students, held at MIT and at Harvard in alternate years. It is held in February and November of each year. With about 900 local participants, HMMT is one of the largest math contests in the United States. Six individual tests (each participant is to pick 2 out of 4 Subject Tests: Algebra, Geometry, Calculus, and Combinatorics) and two team events (the Team Round and the Guts Round) are the major events of the Tournament.

As the HMMT is restricted to teams within 75 miles of Cambridge, there are many high school students within US but outside the 75 miles radius, and outside of US, who are unable to attend the competitions to share in the challenge and excitement of the contest. Hence, the informal and unofficial Harvard-MIT Online Tournament is created. For the online tournament, no prizes are awarded, but top-performing teams and individuals are recognised on the HMMT website.

A group of 8 NUS High School students were among 81 high school students from all around the world who participated in the 2011 HMMT Online Competition held on 13 February (Sunday) from 1 - 7 am, Singapore time. The NUS High students did well, emerging tops in a number of categories, as seen below:

Yesterday, Wei Jue, Stephen and I went to St. Andrew's Secondary School to take part in the Inter-Primary Mathematics and Science Competition.

There were 40 MCQ questions, 20 of which were Math questions and 20 Science questions. We were given 40 minutes. The Maths questions were do-able but I could not answer most of the Science questions (I put 'C' for those which I had no inking of the answers). After the competition, we proceeded to the refreshments, comprising beehoon, fishballs, hard-boiled egg halves, nuggets and fruit punch. I did not have much time to eat as the special event was slated to commence 30 minutes later. The special event was more like a running event where we were given questions and had to find the answers (about God?!) from the walls and flooring in the school hall.

Before the prize presentation, we were elated to be informed that our school was one of the top 3 schools (out of 32 participating schools) which got into the grand finals, the buzzer round. It was held on the stage. There were 6 tables separated into 3 groups, with one computer for each group. The mouse of the computer was the buzzer but it had no sound; the word 'Team A/B/C' would appear on the display depending on which team pressed the buzzer first. Then, the team members would use the microphone on the table to say the answer. The 1st team to answer would get 5 points if the answer was correct, and 2 points would be deducted for a wrong answers. For wrong answer, the remaining 2 teams could answer - if they answered correctly, they would get 3 points, if answered wrongly, they would lose 1 point. My team could only do the Math questions but we were usually too slow with our answer. Whenever any Science question was posed, we would wait for the other teams to answer hoping they would get marks deducted for giving incorrect answers. At the end of the buzzer round, Team A had 23 points, Team B (my team) had 10 points and Team C had -2 points. We emerged Team 2nd and won a trophy each! Wei Jue also won another trophy for being the Individual 3rd. Haha, now our teacher Mr Ng could brag about our achievements again ☺ :P
Posted by Lim Jeck at 11:21 No comments:

Qn on cbox: There are two containers A and B. Each of them contains 9 white marbles, 9 black marbles and 9 red marbles. If 10 marbles are removed from A and placed into B. how many marbles must be returned from B to A to make sure that there are at least 8 marbles of each colour in A?

This is posted by LJ's mum

The selection of Singapore representatives (only citizens and PRs are eligible) for the above competitions is through rigorous selection processes. Typically, high-potential students are selected from the local competitions (SMO, SChO, SPhO, SBO, NOI, etc.) and they will go through weekly training by NUS lecturers/professors/trainers and then sit for a series of selection tests, before the final national teams to represent Singapore are selected. The national teams then go through more intensive training sessions (could be daily, starting from June holidays up till international olympiads in early/mid July).

The International olympiads are usually held in July of each year (with the exception of IOI, which may be held in August). It is not impossible for a student to represent Singapore in more than 1 Olympiad. However, it is evident that with all the intensive trainings and the international olympiads being held closely together (in June/July), a student may have to make the difficult choice of giving up one olympiad for another. Or the student could try again, to gain a coveted place in the "dropped" olympiad's national team, in the following year.

I think if one is going to pursue the ultimate in Olympiads (i.e. represent Singapore in IMO/IPhO/IChO/IBO/IOI), one will need to put his/her heart and soul into it. One should probably be involved in not more than 2, or at most 3 types of national-level olympiads. If you get involved in too many, you could become "Jack of all trades, master of none". It is also not practical to be involved in too many, as the competitions, training sessions and selection tests are bound to clash with one another, not forgetting that in the midst you will have heavy school workload to juggle, so the balancing act is going to be extremely challenging.

For Lim Jeck, he is focussing more on IMO, but he is also involved in Physics Olympiad Training (school elective module) and NOI/IOI training. He is taking part in the Maths/Physics/Informatics olympiads. So far he has represented Singapore in IMO twice, in 2009 and 2010. Hopefully he has the chance to represent Singapore in IMO again in 2011 - 2013 (and clinches a Gold eventually), and also in IOI, in 2012 or 2013.
Posted by Lim Jeck at 10:08 1 comment:

This morning I took the Asian Pacific Maths Olympiad at NUS High. There were 5 questions, we were given 4 hrs. Question 3 is on Geometry. I took 1.5 hours to do the first 4 questions. For the next 2.5 hours I tried to solve question 5, but I think I only managed to solve it partially.

So I think I solve a total of 4.5 questions, which is better than how I did the previous 2 years :)

Afternote: I got about 31 or 32 marks for APMO 2011. Past year APMO test papers, solutions and results can be found in http://www.mmjp.or.jp/competitions/APMO/
Posted by Lim Jeck at 19:52 3 comments: