Off to Shen Zhen, China 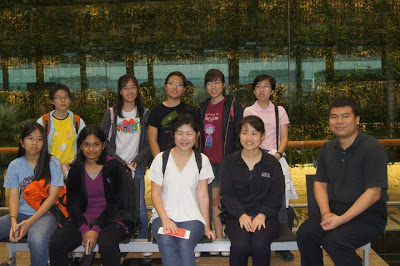 Lim Min left for Shen Zhen this morning. She is part of the Singapore Team participating in the China Girls Math Olympiad. She will be back on Wednesday night.
Posted by Lim Jeck at 23:06 1 comment:

Lim Jeck has returned home safely this morning - this certainly beats all the accolades that he has won in the IMO :) After an exhausting 12.5-hr flight, he is now sleeping soundly. After all these euphoria at the IMO, the next few weeks he will have rough sledding playing catch-up with all the missed school lessons. :(

I think it is going to be a challenging task for Singapore to maintain her top positions (country rank 3rd and individual ranks 2nd, 4th and 6th) next year. Out of the 5 team members who should qualify for next year's IMO again, 2 are likely to move to other Science Olympiads. This year's questions are favourable to the team, next year's questions might not be.

Anyway, back to my main topic, the Question 6 which stumped many contestants except for the 6 (Lim Jeck being one of them) out of a total of 564 contestants, who could solve it completely. 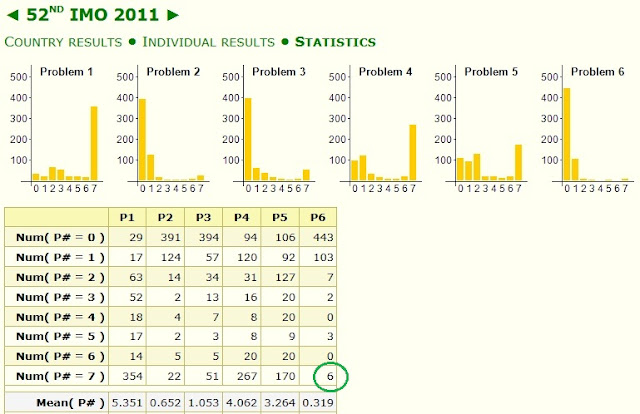 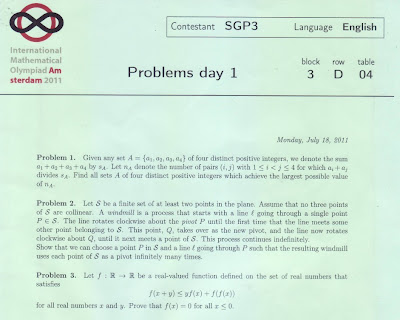 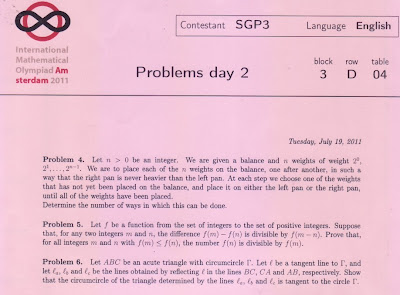 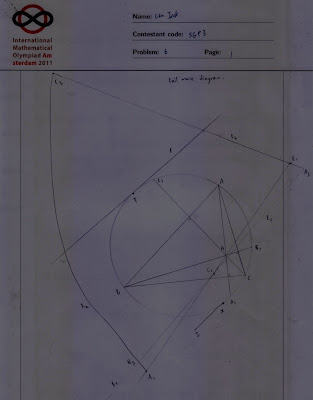 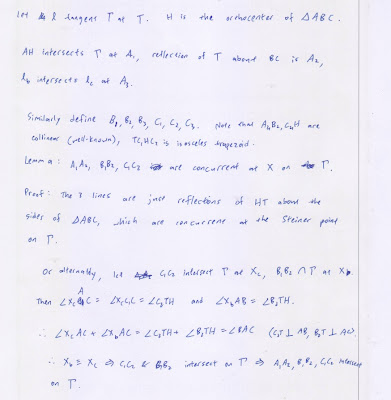 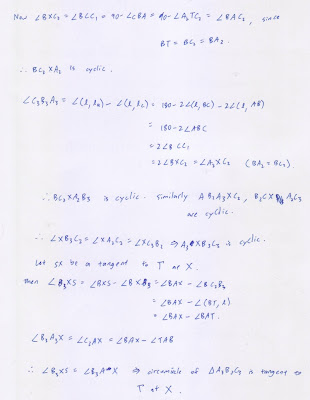 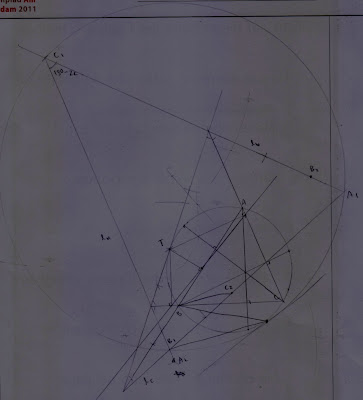 Wow ... This is Singapore's best showing in 24 years (after participating in IMO since 1988). Singapore is ranked 3rd, just after China and USA, and we have won 4 Gold 1 Silver and 1 Bronze medals. :O 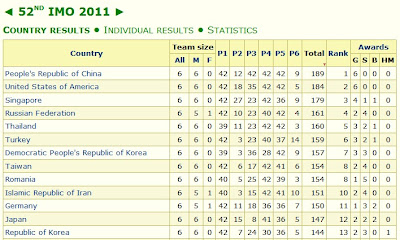 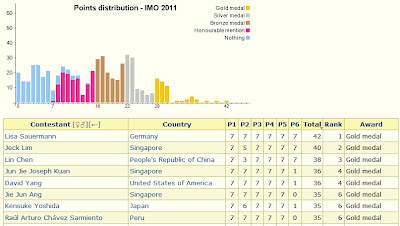 Speechless :D If the same team (minus Jie Jun who is in JC2 this year) goes again next year, do you think we can beat China to be the top ranking country in IMO 2012 (Argentina)? :P

Afterparty:
You can see the Singapore team, about 19-22 seconds into the video:

Wow .. you can see the Singapore Team in this video. 13-15 secs into the video, you can see Lim Jeck, Joseph, Yan Sheng, Ryan and Jie Jun.

3 questions each day are scheduled to be coordinated. However, Team Singapore's coordination was done so efficiently that they managed to complete 5 questions (P1, P2, P3, P4, P6) in Day 1 of coordination. Left with P5 (or Question 5).

Update: All partial scores are removed ... full results to be released soon, likely tomorrow late night. Sorry to keep you all in suspense :P
Posted by Lim Jeck at 05:55 No comments: 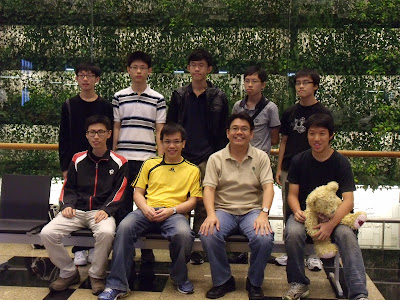 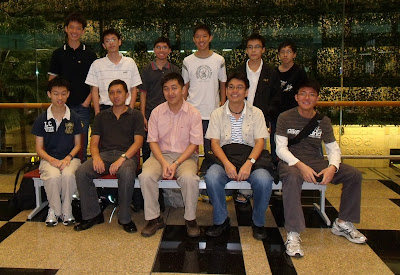 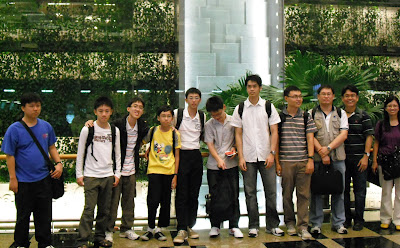 Can you find who else has appeared in all 3 photos, besides Lim Jeck?
Posted by Lim Jeck at 09:01 No comments:

Off to Amsterdam, The Netherlands

Tonight at 2355 hrs we will be flying on Singapore Airlines SQ324 to Amsterdam for the 52nd International Mathematical Olympiad (IMO). A/Prof Wong and A/Prof Tay had flown there earlier for the jury meeting.

During the IMO, we will be staying at Novotel Amsterdam City. The temperature is about 12 to 22 degree celsius.

A total of 574 participants from 102 countries (check here) are taking part in the 52nd IMO.

Official results of the IMO should be out by 23 July. Past and present IMO results can be checked here.
Posted by Lim Jeck at 17:30 No comments:

This morning, my teacher brought us (Wei Wei, Ji Xuan, Jia Ning, Stephen, Wei Jue and I) to the River Valley Maths Challenge (RVMC). 363 students from 62 schools took part in the RVMC. The participants were given free water and ruler. The individual round was easy, many people commented that they could do all the questions but I made a number of careless mistakes. The competition was held in the RVHS auditorium. We had to write our answers on the a separate sheet, there was no shading on OAS form. The team round was harder than the individual round, my team could not do one question and did not multiply correctly the last question, which was 59x59x59.

The food was nice, but I was just a tad disappointed that it was not buffet kind as each one of us had paid $5. There was mango pudding and packet lunch. I thought that the sauce was ketchup and was wondering why it was so spicy, until Step told me it was chilli.

At the prize presentation, there was an audience Math quiz where vouchers could be won by anyone who gave the correct answers. It was based on luck and quick calculation and we were not supposed to use calculator but I think I was not the only one who cheated as someone could compute 1000000000/50/60/24/365. They must call you before you could answer so an element of luck was involved here.

This is posted by Lim Li
(Note: I did not take part in this competition as I am P6!)

Guys or Gals: Who's better at Maths Olympiad?

Generally speaking, guys perform much better than gals in Maths Olympiad. Some evidences are below:
- Annual International Mathematical Olympiad (IMO) total participation: typically, 90% male and 10% female
- Top 10 winners of Singapore Mathematical Olympiad (SMO) - SMO Junior 2010 (9 boys, 1 girl), SMO Senior 2010 (9 boys, 1 girl), SMO Open 2010 (10 boys)
- Singapore's participation in IMO from 2006-2011: all-boys team
- Out of about 24 members in the 2010/2011 National Team, there is only 1 girl
- No girl has ever topped the SMO Junior/Senior/Open
- No girl has ever topped the following primary-level Math Olympiad competitions: NMOS/SMOPS/APMOPS/RIPWMC

Nevertheless, as in most things in life, there are exceptions. Lisa Sauermann from Germany has been one of the top winners in the IMO. To-date, she has garnered 3 Gold and 1 Silver IMO medals. She was ranked individual 4th in 2010 and 3rd in 2009. 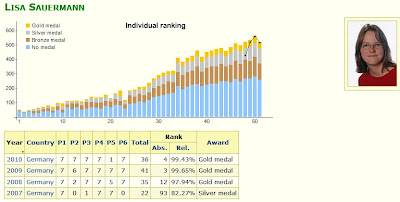 Best of all, Lisa (age 18 this year) is taking part in IMO 2011, and she looks set to take over the throne from Christian Reiher, as the Champion in the IMO Hall of Fame. Those ranked above her in the current Hall of Fame are all past (or long past) 19 years old and are not eligible to take part in the IMO anymore. 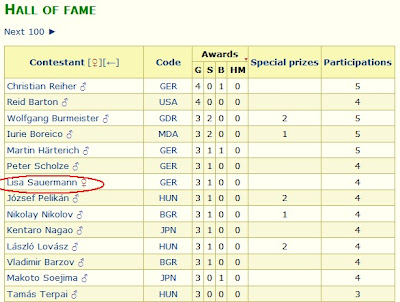 I wonder if Lisa is taking part again next year ....

To all girls out there who aspire to shine in the Mathematical Olympiad arena: if Lisa can do it, you can do it too!
Posted by Lim Jeck at 14:43 3 comments: