Lim Min has received an offer of a place in the NTU Double Degree programme in Accountancy and Business. 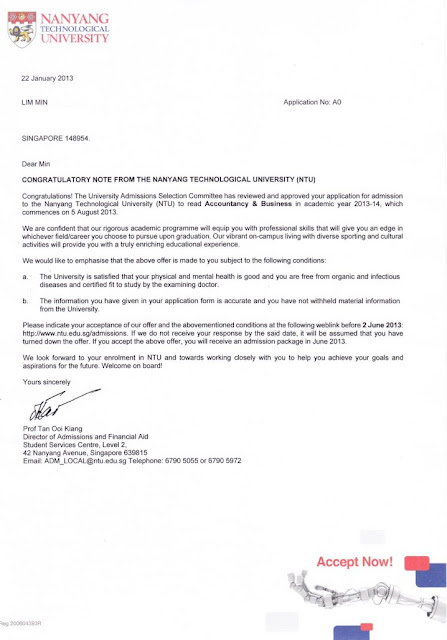 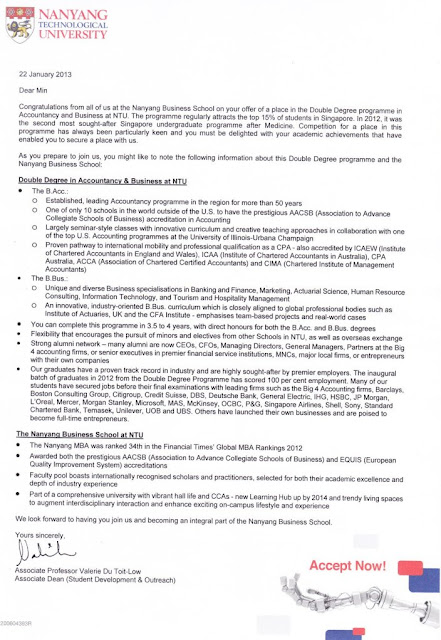 Since December 2012, Lim Min has been giving 1-1 home tuition, and she has 14-15 students so far. She is charging $20 - $30 per hour, and makes a princely sum each month, from these tuition assignments. Lately, there are more and more new tuition requests, and she has been passing them to her friends. From Lim Min's experience, it shows tuition industry in Singapore is certainly a lucrative business. I can't imagine how much full time tutors who charge much more, and who are giving group tuition, could earn each month. It is perplexing why the students do not approach their peers, seniors and school teachers for help/consultancy (free!) and instead, look to tutors for help (and incurring much of their parents' hard earned $).

Lim Min would be giving relief teaching at RI (JC). There is a confirmed 10-day assignment for her, to teach Math, from 18 Feb to 1 Mar. She intends to read a double degree in NUS, possibly Accountancy and Computing, or Engineering, or Math (any two of these four disciplines), and has applied for an NUS scholarship. The NUS new term will start in August 2013.

This year in his Year 6 at NUS High, Lim Jeck is in both the IMO and APhO/IPhO national training team. Training for IMO is held every Sat morning at NUS Math Dept, whereas training for APhO/IPhO is held on Wed afternoons and Sat mornings. He has decided to call it a day, for the IOI training which is supposed to start this week. Since both IOI 2013 and IPhO 2013 dates clash, and clearly it is not advisable for one to pursue 3 olympiads, naturally one has to go. Though both IMO 2013 (18 to 28 July 2013, at Columbia) and IPhO 2013 (7 to 15 July, Denmark) dates do not clash, if he were to be selected for both olympiads, I think he should perhaps pick only one to go. This is because the intensive training for both olympiads fall in the same period, June to July. If I were him, and if I qualify for both IMO and IPhO, I would opt for the latter. I feel that he had already won 2 IMO Gold medals, and had achieved #1 in the World and perfect score (that is, there is no more room for improvement), it is timely to retire at his peak, from IMO. However, if he indeed qualifies for both national teams (selection tests will be held in April and May 2013), the choice would be for him to make. Let's see what's his choice, when the time comes. [if he has cleared both selection tests, it means he has earned his right to participate in both competitions, shouldn't he be allowed/supported to take part in both competitions? Must he make a choice?]

For Year 2 NUS High, Lim Li has to select 2 out of 3 Art/Humanities/Music modules. As she has no affinity for Art, she opted for Music and Geography. In NUS High, one has to take all the core Math, Physics, Chemistry and Biology modules for Year 1-4, and only 1 Art/Humanities/Music module in Year 3 & 4. I think she is likely to choose Economics or Geography then.
Posted by Ng Bee Yong at 14:15 No comments: 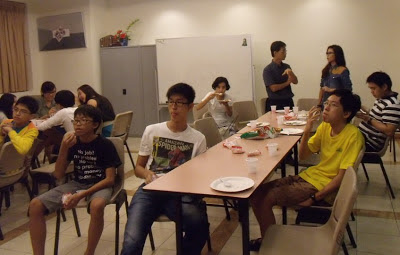 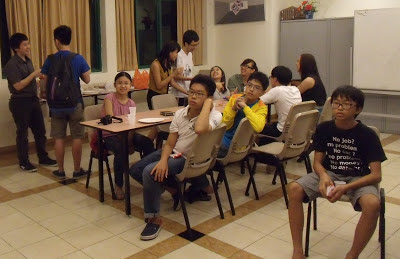